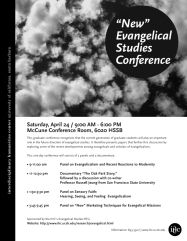 The “New” Evangelical Studies Conference was organized to build upon the conversation started at the American Academy of Religion 2009 Annual Meeting during a panel on “‘New’ Evangelical History?” Recognizing that the current generation of graduate students will play an important role in the future direction of evangelical studies, our conference called for research presentations that explored recent developments among evangelicals and scholars of evangelicalism. The conference was sponsored by the UCSB Research Focus Group on Evangelical Studies, which Kristy Slominski founded and served as convener from 2009-2010.

The conference featured plenary speaker Russell Jueng, scholar of Asian American evangelicalism and a professor at San Francisco State University. Graduate students from across the United States presented their research on three panels, which focused on “Evangelicalism and Recent Reactions to Modernity,” “Sensory Faith: Hearing, Seeing, and Feeling Evangelicalism,” and “How to Market an Evangelical Mission.”

CO-ORGANIZER, INTERDISCIPLINARITY & THE STUDY OF RELIGION, 2011 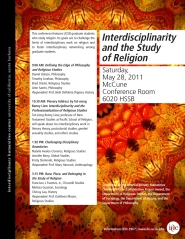 The goals of this graduate student conference at UCSB were to challenge the limits of interdisciplinary work on religion and to foster networking among graduate students from various disciplines. In addition to serving as co-organizer, Kristy Slominski was also one of the grant writers for the Graduate Collaborative Project Award from the Interdisciplinarry Humanities Center at UCSB, which was granted to fund the conference.

The conference featured panels on “Defining the Edge of Philosophy and Religious Studies,” “Challenging Disciplinary Boundaries,” and “Race, Place, and Belonging in the Study of Religion.” The plenary speaker was Tat-siong Benny Liew, Professor of New Testament Studies at the Pacific School of Religion, who spoke on Interdisciplinarity and the Professionalization of Religious Studies

This conference took place at UCSB on May 5th, 2012  in honor of Catherine L. Albanese, Professor Emerita of Religious Studies. Research was presented by former students of Albanese to acknowledge her influence on their work in the field of American religious history. Kristy Slominski worked with the primary organizer of the conference, Eric Mazur, to coordinate on-site aspects of the conference.

In this position, she also wrote and received the Scholarly Collaborations Grant for Graduate Student Academic Advancement from the UCSB Graduate Division to support an event in coordination with the conference. With these funds, she organized and moderated an Alumni Job Market Panel for some of the former students to share tips with current graduate students in Religious Studies on the job application process.

Based on her experiences with conference organizing committees in academia, as well as planning district conferences and events for the volunteer organization Circle K International, she created this guide in 2010 to help others plan academic conferences, with a particular emphasis on how to creatively use a small budget.